Books that inspired, influenced or affected me positively as a child. 13 August 2022 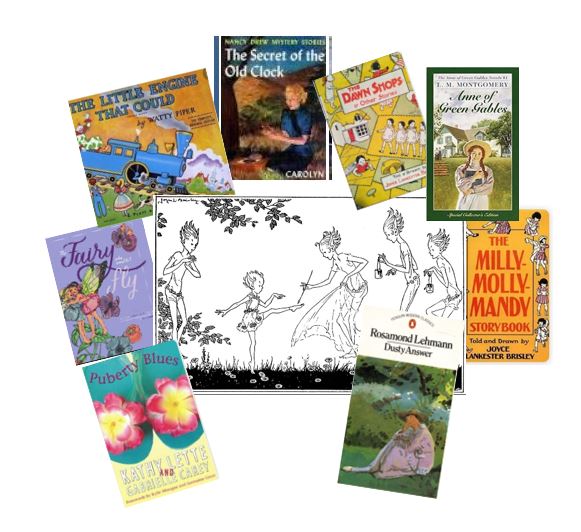 31 Aug Books that inspired, influenced or affected me positively as a child. 13 August 2022

Books that inspired, influenced or affected me positively as a child.
13 August 2022

Our esteemed panel was:

The fourth of our five Dinner and Discussions for Older Lesbians, was inspired by an idea from Jan and Pearlie, both Ten Forty Committee members and book lovers extraordinaire. We were fortunate that two more women agreed to be on the panel to share two childhood books of significance to them.

Following the acknowledgement of the local indigenous people, of the Wangal group, we were ready to begin. Our new (actually second hand ) speaker and microphone, was ready to have its first use. Pearlie as facilitator introduced Jan who told us she was born in a small country town where books were hard to come by back in the 1940s and 50s. Her memorable book was The Dawn Shops and other stories, told and drawn by Joyce Lankester Brisley published 1949. This author also wrote, Milly Molly Mandy. Jan said she enjoyed these stories very much.

The next speaker, Chris, also born in regional NSW, explained that books were a rarity for her until she was about eight years old when, the Newcastle library organised a library service to be opened in a nearby town, for a few hours, two or three times a week. Chris spoke of the two women who ran this library with great fondness. One in particular, Barbara Ward. Chris loved seeing so many new books. Her memorable book was, Ann of Green Gables, by Lucy Maud Montgomery, published 1905. The story was based on the author’s own life, spent at Green Gables, on Prince Edward Island, in Canada’s north east. Chris identified with Ann’s love of life, energy and resilience.

Glen, a regional woman, was born in Kuri Kuri in the Hunter region. Her chosen book was Heidi, by Joanna Spyri. Heidi is an inspiration as she has to survive the loss of her parents, a grumpy grandfather, whose heart she softens, and being separated from her beloved mountains.

Pearlie, unlike the other speakers, was born in Sydney, Bondi Junction to be exact. Her inspiring childhood book was, ‘The little train that could, a tale from early white American folklore, intended to teach children about optimism and hard work. For Pearlie the words I think I can, I thought I could are like a mantra she has carried from her early childhood on. Like, The little red hen, (the first communist in children’s literature?) these books don’t have an actual named author, though many writers have published version of the stories over many, many years.

Each speaker then shared a book that inspired them from their teen years. For Jan it was Dusty Answer by Rosamund Lehmann. In the book, childhood friendships develop into romantic entanglements that continue as the main character leaves home.

Chris cited Silas Marner, by George Eliot, as the book she frequently returns to. Silas Marner is a weaver who is cheated by a friend, loses the woman he loves as a result, has his hard-earned money stolen but finding a small (orphaned) child on his hearth, takes her in and raises her with love. Sounds simple but this is a tale that deals with class, and the social changes of the industrial revolution, as well as he rewards of giving love over money.

For Glen the tragedy of, Tess of the D’urbervilles: a pure woman, by Thomas Hardy, as a book she loved and says it is a must read. I can only agree. Hardy, heard about the hanging of a woman who had killed her violent husband, he felt the woman was the victim and drew on this for the character Tess.

Pearlie shared the memory of the private library that she and her mother used. For two pennies they could borrow a book for up to four weeks, just entering the shop was a thrill. She was drawn to the series of books based on Dimsie, of the Lower IV. There were nine Dimsie books in total. The first one published in 1920, the last one in 1944 when Dimsie, a married woman, makes potions for healing from herbs in her back garden, all to help the war effort. The first book began when Dimsie was ten years old and it was these earlier books that appealed most to Pearlie. Dorita Fairlie Bruce, was the author.

Following our panel of speakers the rest of the group shared their significant childhood stories. The enthusiasm and interest was such that the event ran 40minutes overtime! Most of the books mentioned were written by women and had strong female characters, most of whom had to overcome difficulties. We all agreed that libraries were very important institutions in our lives.

Feminists have long recognised the importance of libraries and in Sydney today we have two independent feminist libraries, The Jessie Street Library, and The Women’s Library, in Newtown. Both run by volunteers.

You can listen to the speakers here.  http://olderdykes.org/wp-content/uploads/2022_08_13-books-that-inspired-you.mp3