In 1990, members of Ten Forty in Sydney who were concerned at the cost of flying to interstate conferences each year established a fundraising group to help with expenses. Large numbers of women who had previously been unaware of 10/40 began to attend fundraising events such as the Amazon Games, Sunday afternoon tea dances, a mid-winter feast and garage sales. They also began coming to purely social events such as summer picnics and Sunday brunches.

This new social dimension changed the profile of the Ten Forty group in Sydney. Before long we were meeting in a variety of venues every second month for dinner, discussion and dancing – what we called the 3-Ds. These evenings attracted many new members and quickly became a popular way to reconnect with old friends, meet new ones (and lovers!), network, dance, talk and generally have a good time.

The bi-monthly meetings are now called Dinner and Discussion as we soon realised we needed a decent floor and good music (not always available) for dancing! These meetings continue to be held on the first Saturday of every second month.

In 1991, we also decided to hold our own one-day mini-conference in Sydney as an alternative for women who could not afford to travel interstate. The annual mini-conferences continued until 1998 with a unique mix of social, physical, political and intellectual activities, some years with as many as sixty women attending. Like the national annual conferences, mini-conferences were very informal and lots of fun.

At every national and almost every mini conference two recurrent themes came up: lesbians and housing. 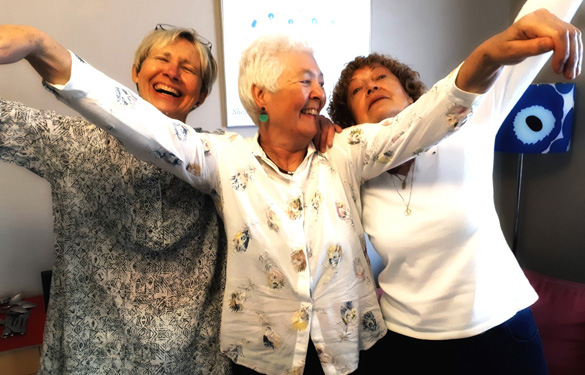 While the initial Ten Forty Conference hoped to attract politically active feminists of all hues and sexualities, the reality was that a huge majority of women attending the conferences were lesbian feminists. At the 1989 conference in Sydney this was named, faced, argued about, cried over and celebrated. The only decision we made was that future decisions about whether Ten Forty was promoted as ‘lesbian’ would be left to those women organising each conference.

In 1993, with a small grant from the Mardi Gras Committee, a large number of lesbians from the Sydney Ten Forty group took to the street and proclaimed their presence in the annual Gay and Lesbian Mardi Gras parade. While there was overall acceptance in Ten Forty that older lesbians should be represented in the Parade, there was a small but strong group opposed to Ten Forty as a whole being identified as a lesbian group. The issue was finally resolved at a special meeting in mid-2000 when a majority of members voted for Ten Forty to become known as a ‘lesbian group’.

The other theme which always popped up at conferences and mini-conferences (no matter where, or what the set topic), was the need for, and anxiety about, appropriate housing in our old age. The main anxiety was often identified as fear of loneliness. Through endless talking we discovered that our fears were based on different experiences and/or beliefs about women and ageing.

Some of us had seen our mothers, aunts and grandmothers alone and embittered; some of us were convinced that old age means the end of the being able to attract others; and many of us (wrongly) assumed that all old people end up in homes for the aged. The one thing we seemed to agree on was the dream of an “old dykes home”.

Whats on in Sydney